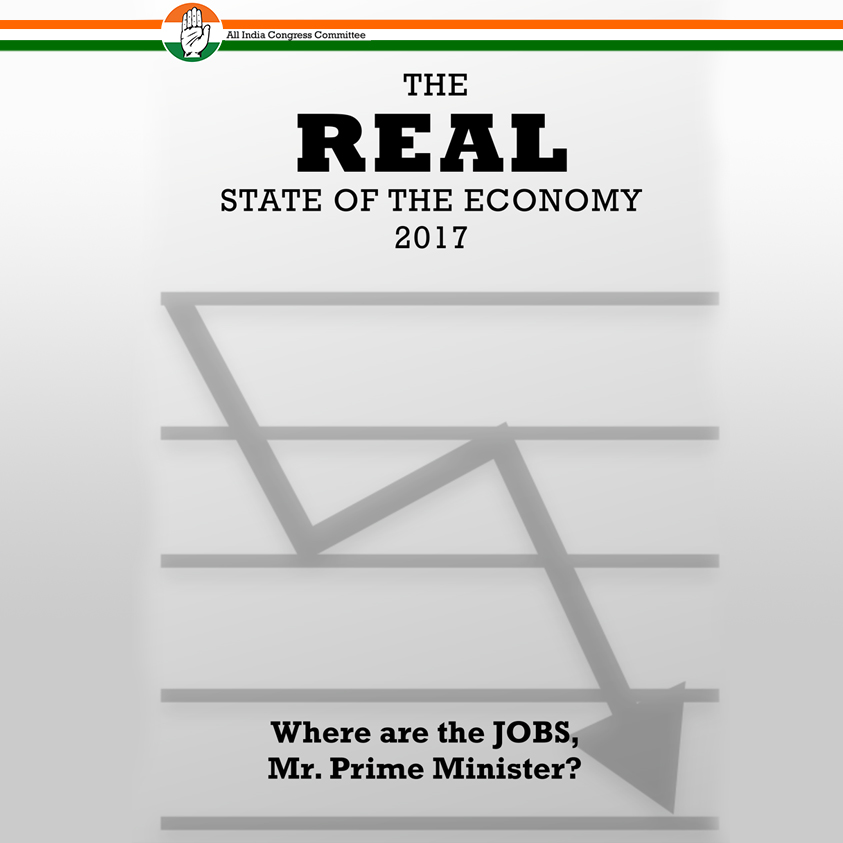 Subject:- ‘Right of withdrawal of money’ without restrictions; Affixation of Responsibility & Resignation of RBI Governor for the ‘Demonetisation Mess’ & ‘Economic Anarchy’; Restoration of ‘RBI’s autonomy’ as India’s financial regulator.

An unwitting decision of ‘demonetisation’ has pushed 125 crore people of India into a web of humungous problems and difficulties.

India’s ‘wheel of development’ has come to a standstill as crores of people are lining up in front of banks and ATMs for last 70 days by giving up their day-to-day livelihood. What is tragic is that these never-ending lines are for withdrawing one’s own hard-earned money. ‘Demonetisation’ has turned out to be a surgical strike on India’s poor, farmers, labour, shopkeepers, small businesses, middle class and the entire unorganized sector. An autocratic Prime Minister, Shri Narendra Modi, bloating over the arrogance of numbers and a captive RBI, has plunged the country into a state of ‘economic anarchy’, wiping out people’s earnings and creating a colossal sense of fear and insecurity.

(i) Why is ordinary Indian not permitted to withdraw his/her hard-earned money from their own account? As questioned by Shri Rahul Gandhi, Congress Vice-President and Dr. Manmohan Singh, former Prime Minister, can Modi Government or RBI Modi name a single country where people have deposited their own money in their bank accounts but are not allowed to withdraw their money? Why is RBI not lifting the restriction of withdrawal of Rs.24,000 per week?

(ii) ‘Demonetisation’ has caused tragic deaths of 120 innocent individuals. What was their fault? Who is responsible for these devastating stories of heart rendering manmade tragedies of human suffering on account of ‘demonetisation’? RBI as also Modi government should unconditionally apologise to these families and the entire Nation, besides making special provision for compensation to the families of the deceased.

(iii) RBI, Finance Ministry and other departments of Government have changed the rules and directives on demonetisation 138 times in 70 days. RBI alone has issued 78 notifications of ‘rule change’ in 70 days making people term it as ‘Reverse Bank of India’. Does it not reflect and absolute lack of comprehension and unpreparedness on part of RBI? Truth is, confusion confounds RBI and Modi government completely.

Why is RBI not coming forward to disclose to people of India the time that would be taken in replacement of ‘old currency’ with ‘new currency’?

(v) New notes of Rs.500 and Rs.2000 have no new security features. There is no new water mark or security thread or Fiber or latent image. Under these circumstances, how are these notes more secure than the previous withdrawn currency? Can mere change of colour or size of notes make them more secure? Do RBI and Prime Minister take responsibility for the same?

Shockingly, the new Rs.500 notes of three different types have been printed on account of an error as admitted by RBI itself. Will it not lead to counterfeiting of currency by those spreading fake currency in India?

Another shocker has been the poor quality of ink used in the new Rs.500 and Rs.2000 notes, which leads to the colour of the notes coming off in no time. Does it not reflect the poor planning and execution putting the credibility of India’s currency at stake with such low quality of notes where even the printing ink comes off?

(vi) Have RBI and Modi Government calculated the cost of replacing old notes with new notes? Is it Rs.25,000-30,000 crore, as has been stated by many economists? Who is going to bear this cost?

(viii) Under the ‘Black Money Amnesty Scheme, 2016’, those making disclosure have been permitted to pay the taxes in old currency. As honest people languished in bank lines, why were those evading taxes and hoarding black money given this opportunity by RBI and Modi government? Does it not prove a tacit complicity to protect black money hoarderers?

(ix) ‘Demonetisation’ has deeply hurt the ‘National Income’ and ‘GDP’. Centre for Monitoring on Indian Economy (CMIE) has assessed the first 50 days loss of demonetisation at Rs.1,28,000 crore. In a report on 16th January, 2017; International Monetary Funds (IMF) has predicted a 1% loss to India’s GDP during the current financial year i.e. 2016-17. This would mean a loss of Rs.1,50,000 crore. Noted economist & former Prime Minister, Dr. Manmohan Singh has assessed the loss to GDP at nearly 2% or Rs.3,00,000 crore. As per IMF’s report, India has lost the tag of ‘fastest growing economy’ to China. Even the report dated 17th January, 2017 of ‘World Economic Forum’ has downgraded India’s position in ‘Inclusive Growth & Development Index’ to No. 60 out of 79 countries.

Will RBI and Modi government give an estimate of loss to economy and GDP?

(x) ‘Demonetisation’ has paralysed the entire agricultural economy. Farm and Cooperative sectors have been the worst hit with a unilateral embargo being placed on 370 District Central Cooperative Banks and over 93,000 Agricultural Cooperative Credit Societies.

Small and Medium industries have shit down across the country with massive job losses. Worst hit is the entire unorganized sector comprising of street vendors, hawkers, carpenters, plumbers, masons, electricians, blacksmiths, cloth merchants, kiryana shop owners, vegetable traders, small traders and shopkeepers. Entire honest cash economy of India, which is the biggest job generator has been paralysed. Did RBI or Modi government apply their mind to these consequences?

(2) AFFIXATION OF RESPONSIBILITY OF RBI GOVERNOR FOR EROSION OF CREDIBILITY AND SUBJUGATION OF AUTONOMY OF RBI.

Why did RBI not undertake or ask the Modi government to affect a cost – benefit analysis of withdrawing 86% of currency in circulation with one stroke? Why is RBI not placing in public domain the Minutes of the Meeting dated 8th November, 2016 of RBI? Is it for the fear of disclosing proof of surrender of RBI’s autonomy before Modi government’s diktats?

(ii) United Forum of Reserve Bank’s Officers and Employees have written to RBI Governor on 13th January, 2017 pointing out the ‘operational mismanagement’, which has dented RBI’s autonomy and reputation beyond repair’. This is a clear-cut loss of faith resolution in RBI Governor by none less than RBI officers and employees themselves.

RBI’s officers and employees have also deprecated the surrender of autonomy by unwarranted interference on part of Finance Ministry. RBI Governor has, however, chosen to keep absolutely mum on the entire issue.

RBI has a total of 21 members in its Board of Directors. Out of these, only 8 members attended the meeting on 8th November, 2016 in which decision of demonetisation was taken. Out of these 8 members, only 4 were independent members. How could then such an important decision be taken with the seriousness and rationality that it deserved?

(iii) On 8th November, 2016; a total of 15.44 lakh crore of currency in circulation was demonetised. RBI’s own data suggest that 15 lakh crores have been re-deposited in banks by 30th December, 2016. Of course, NRIs are still permitted to deposit their money in old currency uptill 31st March, 2017. In addition, Government of India has to formulate a solution for change of old currency with the neighbouring country, Nepal.

With 97% of old currency already re-deposited, will RBI and Modi government answer as to where has the black money gone? Has it been changed? If yes, how and what action have the RBI and government taken?

(iv) In name of ‘cashless’, people of India are being charged to 2.5% to 5% of money by private companies. As a regulator, RBI must issue directions for stopping forthwith the charging of commission/service charge in name of ‘cashless transactions’.

(vi) RBI’s data reflect that there was a spurt of Rs.5,86,000 crore in the deposits made in scheduled banks in September, 2016 alone, out of which fixed deposits made in between Ist and 15th September, 2016 alone accounted for nearly Rs.3,20,000 crore. Why has RBI not investigated and explained the reason for this extraordinary spurt in deposits of Rs.5,86,000 crore immediately before demonetisation?

(vii) RBI’s role as India’s financial regulator, as India’s principal monetary authority, as issuer and protector of India’s currency and as promoter of India’s National objectives, stands completely demolished. RBI has, in fact, become a mouth piece of Modi government acting at its whims and fancies. This reflects not only erosion of credibility and integrity of India’s top financial regulator, but is extremely detrimental to a stable financial apparatus essential for propelling the India’s growth story. Need of the hour is to restore RBI’s credibility, autonomy and integrity by unshackling the illegitimate control of Modi government over every aspect of RBI’s functioning.

We, therefore, demand grant of ‘right of withdrawal of own money’ to people of India by lifting all restrictions. RBI and Modi government should issue a ‘white paper’ and answer all the questions and demands raised in the present Memorandum by Congress Party on behalf of people of India.

RBI’s autonomy and statutory powers have been subjugated and compromised. Responsibility lies at the doorsteps of RBI Governor for this erosion of credibility. RBI Governor must forthwith resign taking responsibility for the ‘demonetisation mess’ as also permitting Modi government to encroach upon the jurisdiction of RBI, rendering it as a mouthpiece of the government. Indian National Congress has created a nurtured the institution of RBI over decades. Times demand that RBI’s autonomy as India’s financial regulator be restored forthwith.